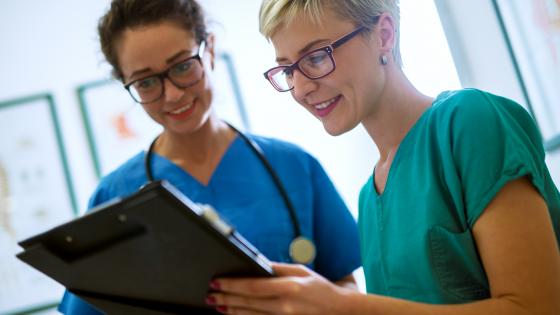 As part of his internship, Trey is working night intake at a psychiatric hospital in a medium-sized college town. It’s been pretty quiet all evening until a little after 1 a.m., when he hears shouting in the outer hallway.

Trey looks at Lisa, his fellow student intern, who says, “What’s going on out there?”

A moment later the doors burst open, and a young man, who looks about 18 years old, is escorted in to the intake desk. He is agitated and has tears on his face, but he is not showing signs of violence or aggression, beyond the brief shouting he did out in the hallway.

He plunks himself down in the chair across from the intake desk and buries his face in his hands, rocking slightly and moaning. He has a slight body odor and is perspiring heavily.

“He’s all yours,” Lisa whispers.

Trey ignores her and moves quickly to the intake desk. Lisa runs off to find the supervising nurse, who has gone on break.

“Hey there,” Trey says calmly, bending over to look into the patient’s eyes. “I’m Trey. What’s up?”

He is almost surprised when the patient stops rocking, sits up, and lowers his hands. “Hey,” he says quietly. “I’m Matt, and this is hell, dude.”

“Not quite,” Trey smiles. “I’m here to help. Can you tell me what’s happened?”

“I’m going all to pieces,” Matt says, “little screws and bolts and debris flying off everywhere.”

Trey says nothing; he just waits.

“I had kind of a breakdown in my dorm,” Matt says. “I threw my laptop out the window.”

“Where you wanna start?”

In fits and starts, Matt conveys small clues that hint at his story.

Matt has always been a “nerd,” he says, according to his older brothers. As a child he often withdrew from play groups at school to play on his own. In isolation, he has always managed to perform well academically, but in group work or group assignments, he has tended to resort to outbursts and a refusal to participate. He says he has always been awkward in social situations and has always found it hard to carry on “a good, rewarding conversation.”

Although his speech is frequently eccentric, Matt manages to convey a very brief picture of how, because of his withdrawal, negative thoughts, and social awkwardness, people tend to leave him on his own, both at large extended family gatherings or social functions in his family’s community and place of worship.

In his senior year of high school, Matt’s grades and SAT scores gained him entrance to a leading Midwest university-despite his disruptive problems.

Matt had been looking forward to going away to school, hoping that part of his problems “fitting in” had to do with his family’s “obscenely proper prominence” in the community, and his older brothers’ “super-dude images, which,” he says, “I will never live up to.”

“At the same time,” he says during intake, “I was also pretty nervous, pretty stressed, pretty freaked out, pretty freaky.”

In his first week of college, Matt found orientation week “disorienting,” he jokes with a slight smile. “Orientation disoriented me. It dissed me. I got dissed. There were people everywhere, like climbing-the-walls-and-on-top-of-you everywhere.”

Except when Trey first initiated conversation, Matt, for the most part, has worked to avoid eye contact and continually bounces his left leg nervously. He is gripping the arms of his chair and looks as if he’s about to fly right out of it.

“My roommate is a jock,” he says. “Jocular jock. Oh, Jocularity, wouldn’t you know they’d put me with a jocular-not-so-very-jocular-jock. They plan that stuff, you know. Just to keep me from escaping, from making a fresh start. Guy’s a jerk, and now, here I am.” He grins and expands his arms, gesturing the psychiatric ward around him.

“And now here I am, just 8 weeks into my first semester away from home, and I’ve just been admitted for totally breaking down, shooting laptop missiles from the second freakin’ floor. They win.”

If Matt is truly suspected of having newly diagnosed or recent-onset schizophrenia, should Trey be letting the conversation focus so much on Matt’s childhood? Where might intake or assessment be best focused?
Based on this initial phase of Matt’s intake interview alone, what symptoms are already suggested in his behavior that would be significant in terms of potential psychosis or schizophrenia?

The American democracy has several principles like; the government is answerable to citizens, who may change the representatives through elections. Freedom of religion: The government can neither support nor suppress religion. Freedom of speech: The government cannot restrict through law or action the personal speech of a citizen; a marketplace of ideas (Reus 2016). The United States Declaration of Independence

Each time researchers dive into the darkest profundities of the sea, they happen upon new, alarming species. Once in a while just a single profound plunge can reveal a large number of new species. This adds to the point of view that there are a heap of superb and peculiar species that hide in the openings of the sea. One such astounding animal is the sea sunfish, or normal mola. Its monstrous body, abnormal shape, and curious method for development has stunned spectators for a considerable length of time. Let us get familiar with its naming and scientific classification, physical attributes, and conduct.

In an assortment of dialects, “sunfish” alludes to its shape and here and there its activities. In English, its name originates from the way that it has a propensity for sunbathing at the outside of the water. Notwithstanding, in numerous dialects, for example, Dutch, Portuguese, French, Catalan, and then some, its name is “moonfish.” Its peculiar shape has propelled a few surprising names through the span of history. Regarding characterization, however it used to be recognized as a pufferfish, it is presently said to be in its own sort named Mola (Froese, Rainer, and Daniel Pauly).

The presence of a sunfish keeps on amazing individuals. It doesn’t have back balances essentially, but instead an adjusted clauvas that goes about as a rudder. It has moderately enormous dorsal balances that are once in a while confused with shark balances. Horizontally, its body is straightened, and it just has little pectoral balances that take after fans. The sunfish appears as though some piece of its body is absent. Be that as it may, what they are not missing is weight and by and large size. The biggest recorded sunfish was 3.2 meters (10.5 feet) in stature. In any case, the normal balance to-balance stature of a sunfish is 2.5 meters (8.2 feet). Likely the most amazing physical measurement of the sunfish is its weight: one example was seen as 2,300 kilograms (5,100 pounds) (Rowan, Juliet). Its bone structure is one of a kind too, with the most brief spinal section of any fish according to its body. Its skeleton is generally comprised of cartilaginous tissues. These tissues are lighter than bone, and in this way give a chance to the sunfish to develop to sizes a lot bigger than most hard fish. For some increasingly hard data, its teeth have a mouth like structure, and the sunfish even has pharyngeal teeth in its throat. Clearly, getting eaten by this fish is a big deal.

This odd fish is in each calm and tropical sea on the planet. They can get around well, in spite of having abnormal balances, now and then venturing out as much as 26 kilometers (16 miles) in a day at a speed of about 3.2 kilometers (2 miles) every hour. They hold generally near the surface, with them going close to 600 meters (2000 feet) profound. Despite the fact that they appear to be somewhat moderate, they can move quickly with regards to abstaining from getting assaulted and when they need to go into all out attack mode. The majority of their time is spent, indeed, chasing beneath 200 meters (660 feet). At the point when they do go to the surface, laying evenly, they are believed to be raising their temperature for a long plunge into colder waters (British Marine Life Study Society). What’s more, when these animals chase, they are searching for jellyfish. That is correct: not as a rule our concept of a delightful dinner. In spite of the fact that the greater part of their eating routine comprises of jellyfish, they like the flavor of littler fishes, fish hatchlings, squid, and shellfish (Scientific Reports). Another irregular quality of this fish is what number of children the females produce: up to 300 million eggs (Kooijman, S. A. L. M., and Lika, K.). Significantly all the more captivating is that they can grow 60 million times their size from birth. There are still a few secrets about this fish. Researchers don’t know about to what extent they can live in the wild, however they generally satisfy 10 years in bondage. Likewise, the mating practices of sunfish are not so much comprehended. What’s more, without it having a dip bladder, researchers just think about how it remains above water.

The sunfish is an incredible sight as a mammoth, leveled fish without tail blades, and it is similarly intriguing inside with its uncommon bone structure, teeth, and ability to replicate at exceptional rates. In spite of the fact that it is huge, it doesn’t give any mischief towards jumpers and helps us in keeping the jellyfish populace under control, no joke proposed. Sunfish (or “moonfish” in the event that you are discussing them in Dutch, for instance) is one of the miracles of the world, and its compromised status ought to be turned around, particularly with its ability to bring forth 300 millions infants.